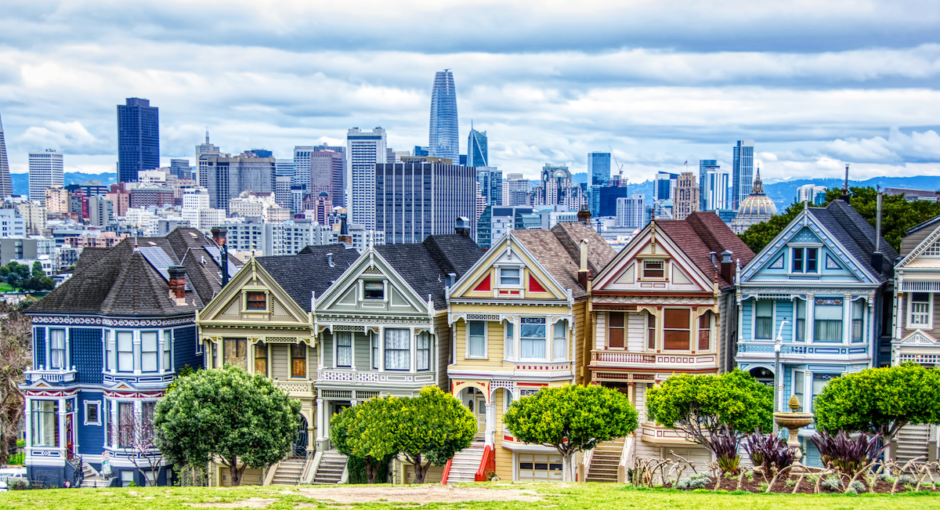 San Francisco is famous for a few things — sourdough, rolling fog, the Golden Gate Bridge, and those incredible painted ladies. But these striking Victoria row houses weren’t always so colorful. In fact, since the building boom after the 1840 gold rush, those house have cycled from chalky white to gray before the 60s and the colorist movement changed everything. If you have a few minutes, it’s an interesting story!

Most of the city’s Victorians were built beginning in the 1860s through about 1905. In the first decade or two, they were built in what’s known as the Queen Anne style. Chalky white paint masked the redwood and offered the appearance of stone. Just like today, wealthy folks built their homes on Nob Hill and in Pacific Heights, and many of the mansions here were destroyed in the 1906 earthquake. But the more modest, mass-produced row houses in the southern and western neighborhoods of the city survived.

These homes had popped up rapidly, and color was used to differentiate. Original Victorian paint schemes were on the simple side though. The body of the building was still white — sometimes gray— but people were starting to flex their creativity somewhat with black, green, and terracotta on window sashes.

By the 1920s, Victorians were dated and completely out of fashion — in some circles, they were branded as full-on monstrosities. During the war and the Great Depression, a surplus of battleship gray paint made it a go-to choice for many homes. Years passed, and many of San Francisco’s old houses, including the now-austere Victorians, fell into disrepair.

And then, in the 1960s, groups of who would become known as “colorists” started playing with the most dazzling colors on these Victorian homes — turquoise and gold and vermilion and lime. By the 70s, entire neighborhoods and streets were defined by these psychedelic colors. At the same time, with soaring home prices in the city, the idea of restoring faded Victorians become more appealing. The vivid colors gave these historic homes a breath of fresh air and signaled their architectural heritage, in a time when the idea of historic preservation was catching on.

Today, San Francisco’s painted ladies are a distinct and beloved part of the city’s charm and history. Gray may be having a prolonged moment in the design world, but in the city, color is still queen.