Nevada is Earthquake Territory Too – Here’s What to Know

Hurricanes may not be a major threat in Nevada, but we have natural disasters of our own. Aside from wildfires, earthquakes are more of a factor than most people realize, especially in northern Nevada. Here’s what you need to know about earthquake hazards if you live in the Silver State, plus some handy tips for being earthquake prepared (AKA, general disaster preparedness).

Sometimes locals jest about “the big one” that will knock California off into the Pacific Ocean and give northern Nevadans beachfront property. While it’s a running joke, it is based in some truth. Between the 1840s and 1960, quake activity in Nevada was highly active. There were several earthquakes with a magnitude of 6 or greater, and Nevada was definitely considered an “earthquake state.”  Since that time, we’ve been in a relatively calm phase. But if Christchurch, New Zealand is any guide, we may just be overdue for a decent shaker. In 2008, there was a magnitude 6 earthquake centered in Wells, NV (about a five-hour drive to Reno, closer to the Utah border), with damage that ended up costing somewhere between $11-$15 million. And that was in 2008 dollars. It was a good reminder, considering many people in this region tend to forget that it really is earthquake territory. After all, there are over 1,500 potential earthquake faults crisscrossing the state.

Prepping for an Earthquake

In a nutshell, being properly prepared in the event of an earthquake involves a few considerations:

According to the CDC, the best way to protect yourself during a good shake is to drop onto your hands and knees to avoid being knocked to the ground. Cover your head and neck (at the least, but try to cover your entire bod) beneath a strong table or desk.  Then, hold on until the shaking stops.

Keep in mind that you’re less likely to be injured if you stay where you are once the shaking begins. The CDC notes that most earthquake-related injuries and deaths are caused by falling objects, like televisions, lamps, glass, and bookcases, or by being knocked over.

What if you’re watching an Aces game with hundreds of other people, sitting on the beach at Lake Tahoe, in a high-rise building downtown, or tooling around in your car? The CDC has very specific instructions, so hop over for a look.

Prepping for an earthquake involves a little planning. No one can predict when an earthquake will hit, so cover your bases with a few different plans.

One particularly useful tip, and this applies to ALL disasters, is to document your property. Walk through each room of your home to photograph your belongings for an inventory of your property’s contents and store them someplace in the cloud so you can access them later. In the event of an emergency, this inventory can help prove the value of what you owned. In addition to photos or video, write down descriptions and include specifics like year, make, and model number as appropriate. 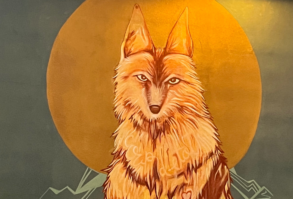 Reno Street Art is a Sight to See